Flexplorer - an easy and neat tool to explore Flex SWCs

Over the past few months, Arul Kumaran, has been silently developing a set of ActionScript developer tools. Those who attended MAX 2006 at Singapore had a chance to have a sneak preview at his AS code editing tool, written completely in AS.

I've been lucky to know him in person, and hence have more previews of his work in progress. The last time we met, he showed me a bunch of other related apps. Being built to target the Flash/ AIR runtime, these tools will definitely open up an unexplored approach to Flash platform development. Among those was this application that can parse .swc files and display the components/ classes inside the swc. Its a pretty nifty tool if you wanna explore the APIs inside a swc file. It also keeps track of recently opened SWC files, so it can function as a repository explorer for all your SWC files! And adding a new SWC file to the app is as easy as dragging and dropping the SWC to the app!
I'm sure this tool will be a great addition to any Flex developer's toolkit. 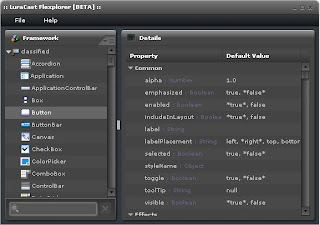 He has now packaged a 'limited' version of the tool - christened as Flexplorer and released a public preview version. This tool is also his entry into the adobe AIRDerby contest. ( I say limited because I've seen more features in the app, which he is holding back probably for refinement ;o) )

You can try Flexplorer by downloading the .air installer file here. This app installs itself over the AIR public beta 1 runtime. If you don't have the runtime, get it here.

Did I mention, flexplorer has a real slick look?
at 5:00 PM

This is really cool app!

I've notified the author. Hopefully he'd do something about it.

To All who liked Flexplorer, It is now live again with more features and Flex 4 support. Please download it from the Adobe AIR Marketplace http://cli.gs/FlexplorerMarketplace :)